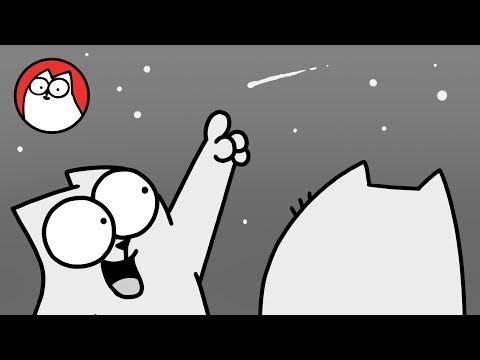 ‘A romantic cat climbs to new heights in order to find a date.’

SMITTEN:
"A love struck cat tries to impress his Valentine."

BUTTERFLIES:
‘A lovestruck cat has a bad case of the butterflies’

HEAD OVER HEELS:
‘A love struck cat falls head over heels for a beautiful queen’.

TOUGH LOVE:
‘A curious cat lands himself in big trouble!’

Q. What software do you use?
A. Simon’s Cat has been made using a variety of animation software over the years. Originally in Adobe Flash. Then TV Paint (and still on occasions) and most recently using CelAction.

Q. Why does it take so long to make each Simon’s Cat film?
A. Animation is a slow process and Simon’s Cat films pay particular attention to observed, real life cat behaviour. Historically the films were traditionally animated frame by frame. More recently we use CelAction which has sped up the process but still requires a lot of care and attention. Each film takes approximately 6-9 weeks to make, depending on complexity, number of characters and special effects.